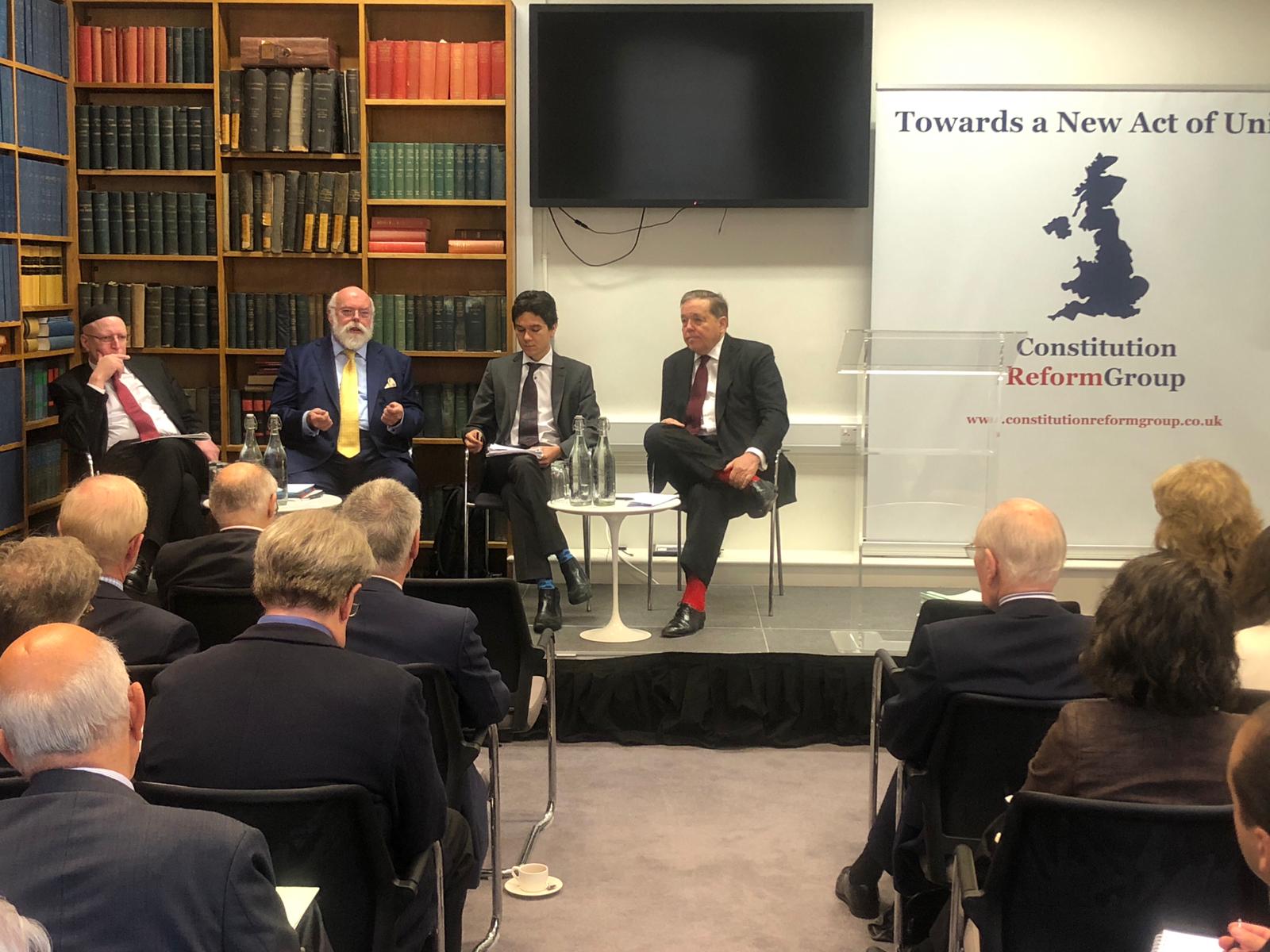 Members of the Steering Committee of the Constitution Reform Group, including The Marquess of Salisbury, Lord Lisvane and Daniel Greenberg, gave an animated briefing to an engaging audience comprising of journalists, MPs, members of the House of Lords and civil society organisations about the Group’s Act of Union Bill 2018 on Thursday 11 October 2018.

The Act of Union Bill 2018, which was introduced as a Private Member’s Bill in the House of Lords on Tuesday 9 October 2018 when it received a formal first reading by Lord Lisvane, is the result of a wide consultation over the last three years among the Steering Committee with academics, policy makers, local councils, the devolved administrations and members of the general public.

The panel discussed the constitutional events that had occurred since the Steering Committee was convened in July 2015, including the introduction of the “English votes for English Laws” procedures in the House of Commons, the Scotland Act 2016, the Cities and Local Devolution Act 2016, the Wales Act 2017 and Brexit. The most notable message conveyed was that haphazard constitutional change had become a modern characteristic of British politics since 1997 which has since seen a growing trend of reactive constitutional change for short-term political gain at the expense of long-term constitutional clarity and coordination. It is because of this that there is an urgent need to create a workable and collective constitutional settlement for the benefit of all nations and parts of the Union, and to respect the work and authority of the devolved parliaments and assemblies.

The panel also discussed why England outside of the capital London has not developed a coherent voice, and how the Bill provides two alternative models for England, including the creation of a directly elected English Parliament. Brexit was also a brief, but important, point of discussion. It was recognised by the House of Lords European Union Committee that “Thanks to Brexit, it is now more important than ever that reform of the devolution settlements should be underpinned by a clear and agreed framework of guiding principles”. The Act of Union Bill 2018 attempts to do just this.

The panel highlighted how the Act of Union Bill 2018 could be used as a symbolic aid for constitutional and national understanding by British citizens across all age groups – a point raised by Counsel for Domestic Legislation and member of the Steering Committee, Daniel Greenberg, who has drafted constitutions for a number of countries across the world.

Speaking after the event, the Marquess of Salisbury, Chairman of the Constitution Reform Group, said “We at the Constitution Reform Group are delighted by the interest our ideas are generating.  We hope anyone who is interested will get in touch with us and take part in our efforts to improve our proposals.  If Brexit does happen, it will be an opportunity to rebuild the United Kingdom’s constitutional arrangements in such a way as, once again, to engage the peoples of the Union in their own governance.”