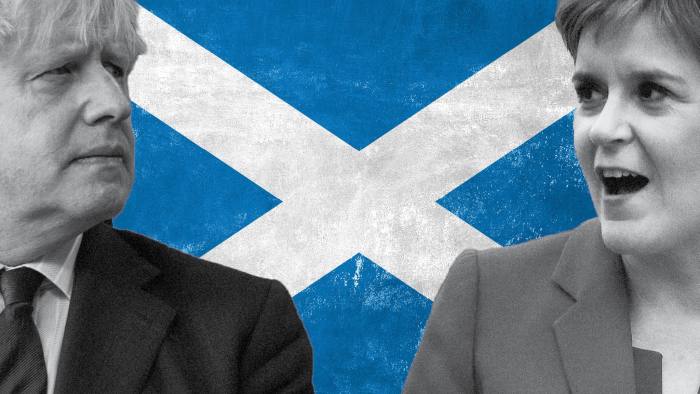 By Mure Dickie in Edinburgh, Daniel Dombey in Madrid

A Scottish independence referendum is a “matter of some urgency” and Scotland should be allowed a vote about leaving the UK next year, Nicola Sturgeon, first minister and Scottish National party leader, declared on Tuesday.

“The kind of future desired by most people in Scotland is very clearly different to that favoured by much of the rest of the UK,” Ms Sturgeon said in a statement to the Scottish parliament about last week’s general election, in which the SNP won 48 of Scotland’s 59 seats.

But Ms Sturgeon faces strong opposition from Boris Johnson, the newly re-elected UK Conservative prime minister, to any rerun of the 2014 independence referendum, in which Scots backed staying in the UK by 55 per cent to 45 per cent.

The leaders differences are amplified by how Mr Johnson is using his election victory to press ahead with Brexit, which the SNP opposes and which Scotland voted against in the 2016 EU referendum.

Does Scotland have a right to choose to leave the UK?

There is broad acceptance among UK political leaders that Scotland, which joined with England to form Great Britain in 1707, can leave the union if that is its democratically expressed will.

The late Conservative prime minister Margaret Thatcher wrote in her memoirs that Scots had “an undoubted right to national self-determination . . . Should they determine on independence, no English party or politician would stand in their way”.

But questions of when or under what conditions Scots can be asked if they want independence are much more contested.

Could Ms Sturgeon hold an independence referendum without Westminster’s approval?

There is much debate among constitutional experts over whether the Scottish parliament can legally arrange an independence referendum under the 1998 devolution act that created it.

Ahead of the 2014 referendum, the UK government said the Edinburgh parliament could not authorise a plebiscite because the constitution was a “reserved” issue for Westminster, but the Scottish administration argued that an advisory vote fell within its powers.

You can’t demand to get Brexit done because voters asked for it whilst demanding that [another independence referendum] be continually rejected despite voters asking for it Andy Mciver, former Scottish Tory head of communications Further dispute was avoided by the UK parliament issuing a so called Section 30 order under which it agreed unambiguously that the referendum could go ahead.

But Mr Johnson said during the election campaign that if Ms Sturgeon sent him another Section 30 request, he will “mark that letter ‘return to sender’ and be done with it”.

Ms Sturgeon has consistently said she wants UK approval for a referendum. “A referendum has to be legal because it has to be accepted as legitimate if we are to be independent,” she said on Sunday.

But some in the SNP want to press ahead with a referendum quickly, if necessary without Westminster’s blessing.

Aileen McHarg, professor of public law at Strathclyde university, said there would be considerable obstacles to such an approach and it would be likely to be rejected by the UK supreme court.

In any case, there would be little to stop the UK parliament passing new legislation to block a referendum should it choose.

Some analysts think Ms Sturgeon is ultimately in no real rush to hold a referendum next year because most opinion polls suggest a majority of Scots do not favour leaving the UK.

What lessons does Catalonia’s independence movement have for Scotland?

People close to Ms Sturgeon are keenly aware of the recent experience of Catalonia, the Spanish region, which analysts say shows the difficulties for an independence movement of holding a referendum without central government approval.

Catalan separatists held a plebiscite in 2017 and subsequently declared independence, but Spain’s constitutional court ruled the vote was illegal and the region’s political leaders have failed to win international recognition for their efforts.

Nine independence leaders have been imprisoned for sedition and thousands of companies have moved their registered headquarters out of the Spanish region.

The fragmented Catalan independence movement, which is supported by roughly half the region’s population, is now debating a less confrontational approach.

How long can Westminster refuse to allow another Scottish independence referendum?

Most analysts think there is little chance of Mr Johnson changing his stance before Scottish parliamentary elections in 2021.

Cabinet Office minister Michael Gove said on Sunday that the UK government would not allow another referendum, although some members of Mr Johnson’s cabinet are less certain Westminster can continue to resist calls if the SNP performs well in the elections.

Andy Mciver, a former Scottish Tory head of communications, said the Conservatives should accept a pro-independence victory in the elections as a mandate for another referendum.

“You can’t demand to get Brexit done because voters asked for it whilst demanding that [another independence referendum] be continually rejected despite voters asking for it,” Mr Mciver wrote on the ConservativeHome website on Tuesday. “The Scottish Tories now need to change their position to one which is more credible, more democratic, and has a better chance of success in 2021.

” But Ms Sturgeon’s best hope of securing a referendum may lie in Mr Johnson’s continued refusal fuelling Scots’ support for independence, followed by a strong SNP performance in the 2021 elections.

If the SNP and pro-independence Green party were to emerge with a majority in the Edinburgh parliament at the 2021 elections, it would increase pressure on Westminster to allow a referendum, said Michael Keating, politics professor at Aberdeen university.

“At that point saying ‘No, you can’t even have a referendum’ is politically just not worth it for the UK government,” said Professor Keating.