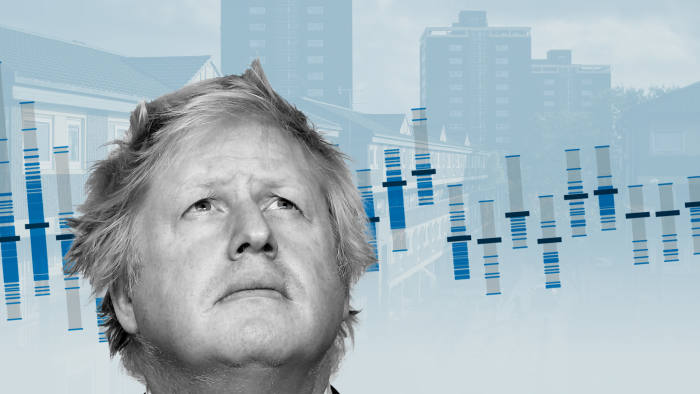 Boris Johnson’s flagship election pledge to “level up” the UK’s underperforming regions, so that “everyone can get a fair share of future prosperity”, is about to come under intense scrutiny.

The Budget on March 11 will be the government’s first opportunity to back its rhetoric with cash, and start helping “left-behind” areas far beyond London and the affluent south-east of England.

The prime minister is under pressure to deliver: he knows the Conservative party only seized seats traditionally held by Labour in northern England, the Midlands and Wales after pledging to improve their areas.

What problem does levelling up seek to address?

On many simple measures such as gross domestic product of each resident, the UK has one of the most regionally unequal economies of any in the advanced world, according to OECD figures.

London is far ahead of all other regions, and notably Wales, the north-east and Northern Ireland, based on the GDP per head measure.

At a more local level, Britain easily has the worst inequality among OECD countries, and this reflects how differences within regions are greater than those between them.

For the Conservatives and Labour, a consensus has built up that these stark differences must be tackled.

Bob Kerslake, a former head of the civil service who has advised Labour, said regional inequality “blights the prospects of future generations” because the “economic potential of large parts of the UK is not being realised”. Andy Haldane, chief economist at the Bank of England, issued a “call to arms” to government in February to address “the interlocking issues of productivity, skills and place” that meant some regions were “steaming ahead” while others have been “left behind”.

But in many ways this is not a new problem for Britain. London’s GDP per worker was 30 per cent higher than the national average in 1900: the gap closed in the middle of the 20th century when economic times were tough, and widened again after 1980.

Why does the UK have large economic inequalities?

The Industrial Strategy Council, which advises the government and is chaired by Mr Haldane, in February listed several key reasons for left-behind areas.

It said in a report that some places had lost their fundamental reason for existing: such as former coalfields and some coastal towns where their main industries — fishing, mining or tourism — had wound up or been severely curtailed. By contrast, bigger cities could benefit from clusters of economic activity which became self-sustaining and attracted new businesses to locate nearby, added the report. These trends were reinforced by people moving from left behind areas to work in these cities. Increasingly, the age profile of places is polarising: cities are becoming younger, while most coastal towns are growing older. Having a much higher proportion of old people generally reduces the dynamism of areas. There is no doubt that well educated and skilled people tend to move to the south-east, exacerbating regional differences.

Henry Overman, professor of economic geography at the London School of Economics, said “having a better-educated labour force is the most important driver of local economic performance”.

David Phillips, associate director at the Institute for Fiscal Studies, a think-tank, said the main difference between places is whether they have high paid jobs.

As so often in economics, the way the inequalities are measured matters enormously.

One reason why London looks so affluent is because it is treated as a single region in official UK statistics. Other regions are very different, comprising cities, towns and rural areas.

Britain’s high regional economic inequality figures are “enormously influenced” by these administrative boundaries, according to Tony Travers, professor of government at the London School of Economics.

When Camden and the City of London is treated as one local area and then compared with Tokyo in OECD statistics, he said the figures were meaningless. “You might as well” compare the house in central London owned by the wealthy Hinduja brothers with “a croft in Scotland”, he added. When the OECD discards administrative boundaries and looks at individual cities and the commuter areas connected to them, the UK’s economic inequalities no longer look larger than many other countries.

Another issue is the risk of relying too much on one measurement. Many areas which perform well on GDP per head actually have low household incomes, so the figures on regional inequalities do not reflect the living standards of those that reside there.

For example, Belfast and Nottingham have dynamic economies, but also high levels of poverty, reflecting how strong GDP per head figures result from commuters going into the cities for work.

Conversely, there are areas with weak local economies but rich households: Dorset is an affluent county by dint of its status as a desirable place to retire to, for instance.

Is London much better off than the rest of the UK?

Britain has dynamic places with high skilled, well paid workers, predominantly in the south-east, but this does not mean that living in the region is easy.

High costs of living — notably housing — mean that median incomes after tax in London are no higher than the national average.

Wellbeing indicators show London as the most anxious and unhappy area of the UK, with residents least likely to say life is worthwhile. All other areas, including Northern Ireland, score much higher.

Tera Allas, director of research and economics at McKinsey UK, said at a local authority level there was “very little correlation” between economic success and life satisfaction.

Britons appear to face an invidious choice: live in the dynamic south-east and grapple with high housing costs that drag down living standards, or move somewhere more affordable that offers worse career prospects.

It all highlights how Mr Johnson’s mission to level up the country will be far from easy to accomplish.