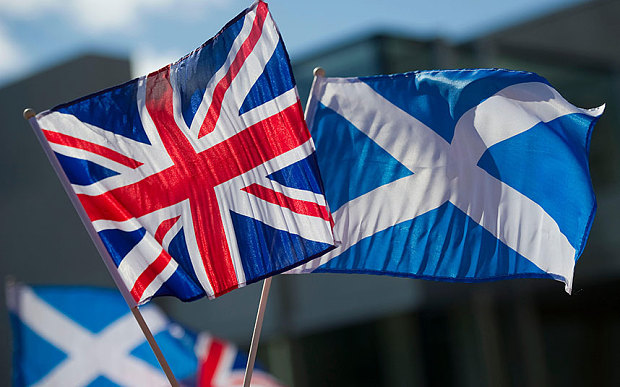 Brexit is not the reason why Scotland might choose to leave the United Kingdom – it simply accelerated a crisis that was already there, Lord Salisbury told Express.co.uk in an exclusive interview.

When Scotland voted against independence in 2014, that seemed to settle the issue: voters north of the border would remain with England, Wales and Northern Ireland in a United Kingdom governed from London. However, less than two years later came the Brexit referendum, and while the UK voted to leave the EU, Scots distinguished themselves and overwhelmingly voted to stay in the bloc. According to the pro-EU Scottish National Party (SNP), Scotland is therefore being unwillingly dragged out of the European club and a second independence referendum should take place.

Addressing Prime Minister Boris Johnson in Parliament last Wednesday, Leader of the SNP Ian Blackford said: “Are you a democrat or not? Do you respect the will of the Scottish people or not?

A shock poll this week suggested the SNP would wipe out the Scottish Tories in a future general election, paving the way for First Minister Nicola Sturgeon to make her bid to break up the Union with a second independence referendum.

Scotland is not the only country to be at risk though, as Northern Ireland might also decide to leave the Union, according to recent polls.

If a hard border is erected in Ireland, 65 percent of Northern Irish people would back a united republic.

Prime Minister Gordon Brown issued a stark warning in August, claiming that the Union is “sleepwalking into oblivion” due to “destructive nationalist ideology”, concluding that “we are, at best, only a precariously United Kingdom”.

The Constitution Reform Group (CRG), an all-party project convened by former leader of the House of Lords, Lord Salisbury, is currently advocating for the Act of Union Bill – a ready-made Bill which includes proposals that could stop this impending break-up.

The CRG believes that the blueprint could be used to resolve the pressing issue, by proposing a federal structure for the continuation of the Union, establishing the principle of self-determination among all four parts.

Talking exclusively to Express.co.uk, Lord Salisbury explained the importance of this Bill, stressing how Brexit was not the reason why it came about.

The former Leader of the House of Lords argued that it was the nature of the devolution bills of the late Nineties that led to today’s crisis, and not the 2016 EU referendum.

He said: “It is no surprise that this has happened.

“Now, this is my personal view, but it is not the view of a number of people who sit on the Constitution Reform Group.

“They would say that our Bill has become much more important because of the prospect of us leaving the EU.

“Scotland will want to leave. Northern Ireland will join the Irish Republic.

Lord Salisbury noted: “Now, I take a slightly different view. I think the danger was always there in the nature of devolution.

“Brexit accelerated a crisis which was already there but I don’t think it introduced a new question.”

With devolution in 1997, Parliament, under the leadership of Tony Blair, granted powers to the Scottish Parliament, the National Assembly for Wales and the Northern Ireland Assembly.

However, even the former Prime Minister admitted he had made a huge mistake with the legislation.

In a 2015 book entitled “British Labour Leaders”, Mr Blair admitted that he did not understand at the time the importance of maintaining cultural unity between the different parts of the UK.

Interviewed by the book’s editors, former Cabinet minister Charles Clarke and University of East Anglia politics lecturer Toby James, Mr Blair said: “I did feel that we made a mistake on devolution.

“We should have understood that, when you change the system of government so that more power is devolved, you need to have ways of culturally keeping England, Scotland and Wales very much in sync with each other.

“We needed to work even stronger for a sense of UK national identity.

“But I don’t accept the idea that we should never have done devolution. If we had not devolved power, then there would have been a massive demand for separation – as there was back in the Sixties and Seventies.”

The Act of Union Bill proposed by the Constitution Reform Group is currently awaiting its second reading.

Former Labour MP and ex-chairman of Vote Leave Gisela Stuart is also on the steering committee of the group.