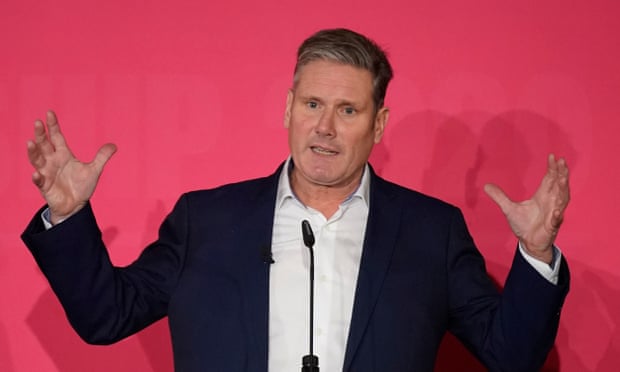 Keir Starmer, the Labour leadership frontrunner, has called for a fully federal UK, devolving power to the nations and regions of England, Scotland, Wales and Northern Ireland after Brexit.

The shadow Brexit secretary said only a new federal structure for the UK could “repair the shattered trust in politics”, amid growing clamour in Scotland for another independence referendum.

He said there would need to be a national conversation about a new constitutional settlement. However, it could mean taking more power away from Westminster and handing it to regional authorities and devolved governments on areas such as raising taxes, green industrial strategies and transport systems.

UK was championed by former prime minister Gordon Brown after the Scottish independence referendum of 2014. He called for a “patriotic third way” with power over fisheries, farming, welfare and far more taxation handed to devolved governments.

At the time, the Scottish Conservatives called on Brown to say whether another referendum would be needed to gain approval for such sweeping changes, while the SNP dismissed it as undeliverable as Labour was “not even in a position to deliver pizza”.

Ahead of three days of campaigning in Scotland, England and Wales, he will say on Monday that the country needs a new political consensus to “put power, wealth and opportunity back into the hands of the people”.

“We need a new constitutional settlement: a large-scale devolution of power and resources. This will involve building a new long-term political and constitutional consensus. I believe that could best be built on the principle of federalism,” he will say.

Earlier on Sunday, Rebecca Long-Bailey, another leading contender, took up a similar theme to Starmer as she called for the Scottish and Welsh parliaments to be put on an “equal footing” with Westminster instead of being “servile” satellites.

Without using the term federalism, she said Holyrood and the Welsh assembly needed to be as “autonomous and independent” as they could possibly be and backed further devolution to help Labour win back ground in Scotland in particular.

Speaking at a leadership hustings, she said: “When we devolved power to Scotland and Wales they were never meant to be a satellite government with Westminster being the king and them being servile under the bottom. They were meant to be on an equal footing. That’s what we need to push forward for.

“I’m always going to argue for the union. But I want our Scottish parliament and our Welsh parliament to feel as completely autonomous and independent as they possibly can whilst having that collaborative relationship with Westminster. That’s why we need to devolve real power – fiscal power, economic power and political power – to Wales and Scotland.”

She gave the answer at an Open Labour event in which she appeared alongside Lisa Nandy and Emily Thornberry. Starmer was not present as he took the weekend off from campaigning because his mother-in-law had had an accident.

Thornberry, who is struggling to make it into the final round of the contest, took a robust tone on Scotland as she pledged to take on the SNP on the grounds of their incompetence rather than constitutional issues.

“I hate the SNP. I think they are Tories wrapped up in nationalist clothing,” she said, to laughter and applause. “They’re not on the left. If they were on the left, how would it be that children in Scotland were now falling behind children in England when it comes to education? They have been in power for 10 years and they are hiding behind constitutional issues and they need to be held to account.”

Nandy said her approach would also be handing back more power to the regions and nations. “We can’t just keep treating Scotland like an afterthought in the Labour party,” she said.

Starmer is currently the favourite in the contest and has made it on to the final ballot alongside Nancy. Long-Bailey has to get one more trade union or affiliate, after Unite gave her their backing on Friday.

In a round of interviews, Len McCluskey, the Unite general secretary, said he would say “good riddance” to any Labour MPs deciding to leave the party if Long-Bailey becomes leader. He praised Long-Bailey’s “brains and brilliance” and said he blamed Labour’s election defeat “virtually solely” on the party backing a second referendum on Brexit.

Asked about council leaders quoted in a Guardian article who said Long-Bailey was a “continuity Corbyn” candidate, McCluskey said there were “lots of these leaders who are anti-Corbyn, so of course they’ll try to stick Rebecca with the same tags and that’s deeply unfair of them.”

He said it was Brexit that had dented Labour’s popularity, not the leader, as Corbyn had been “loved” two years ago.

McCluskey also claimed there was no doubt that Corbyn’s opponents “used the antisemitism issue” to undermine him, prompting criticism from some Labour MPs that he was failing to accept the depth of the problem.

He said he agreed that Labour had “never handled the antisemitism issue correctly”, and he said he had no problem with acknowledging that “lots of people were genuinely concerned”.

However, he said there were “others who were disingenous” and had acted in a “despicable” way to undermine Corbyn’s leadership.

McCluskey defended Richard Burgon and Dawn Butler, two deputy leadership candidates, over their refusal to sign up to a 10-point plan to tackle antisemitism published by the Board of Deputies of British Jews.

The party is preparing to receive the conclusions of an Equalities and Human Rights Commission investigation into its handling of antisemitism early this year.

Two Labour MPs, Catherine McKinnell and Wes Streeting, expressed disapproval at McCluskey’s assessment of the situation. Streeting said: “I’m absolutely convinced that those who dismissed antisemitism concerns as ‘mood music’ and sought to downplay, dismiss and delegitimatise concerns are part of the problem, not those of us who’ve consistently challenged antisemitism.”