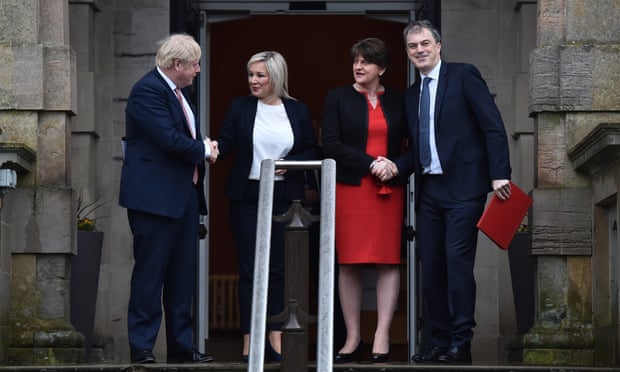 Johnny King is an unlikely subversive but the soft-spoken native of east Belfast has caused a minor earthquake among Ulster unionists.

The 51-year old from a staunchly protestant loyalist background – his father was an Orangeman – recently wrote a newspaper column in the nationalist-leaning Irish News claiming that a united Ireland is the best way forward for the province.

Unsurprisingly the piece prompted a backlash among some sections of the unionist community, but perhaps not as many as would have been the case in the past. Mr King claims almost every unionist he knows agreed with his argument, although they were unwilling to say so publicly.

“We are moving inexorably to a united Ireland position. Unionists should not be burying their heads in the sand about this,” Mr King tells The Telegraph in one of Belfast’s most famous watering holes, The Garrick, close to the city centre.

Unionism has suffered a number of setbacks over the past few months. The Brexit Withdrawal Agreement has put a de facto regulatory and customs border down the Irish sea and Sinn Fein, the former political wing of the IRA, won the popular vote in the recent general election in the south of Ireland. Both of these have put question marks over the future place of Northern Ireland as part of the UK.

Most unionists, whether publicly or privately, are in agreement that it is not a question of if but when a border poll takes place.

In the next few weeks the Belfast Court of Appeal will deliver a judgement in a potentially landmark case. If Raymond McCord, a victims’ rights activist prevails, then he will force the Secretary of State for Northern Ireland to publish the exact criteria that will trigger a border poll. There is a growing consensus on both parts of the island that it will happen within the next five-to-ten years.

Unionism is split on what to do next. Mr King is on one end of the spectrum. He has joined the SDLP, a moderate nationalist party, and warns that unionists must engage with discussions on unity or risk getting swept away by the tide of history.

His argument is that the rationale for loyalism has been undermined by the British government. “What is the point of being a loyalist if that loyalty isn’t reciprocated.” He cites the Irish protocol in the withdrawal agreement as evidence the London would sell out the province if it is in its interests.

He adds that the £10bn subvention from the exchequer every year need to keep the “the most troublesome part of the empire” afloat will strengthen the British government’s resolve to sever ties with the province.

Mr King says unionists boycotted key events in the past such as the 1985 Anglo Irish Agreement because they had a majority and in an election they held the balance of power. “That majority is gone and it is never coming back. Unfortunately there is that mindset that this is our [unionists] country and we will do what we like.”

He says that unionists should engage now with events such as ‘Future Ireland’ – a forum set up to discuss in what circumstances unity would make sense – to ensure that “Northern Ireland’s rich culture and traditions” are fully protected in a new dispensation.

On the opposite end of the spectrum is the Reverend Mervyn Gibson, a Presbyterian minister and the current grand secretary of the Grand Orange Lodge of Ireland. Speaking at the Orange museum in the heart of loyalist east Belfast, Mr Gibson, 62, says there will be a border poll in his lifetime but it has no chance of passing. He says his commitment to the union is not about economics, although that is a compelling argument, it is about cultural identity. “I am British and there is no place for me or people like me in a united Ireland.”

“People ask me why I want to be part of a United Kingdom when they [government] are willing to put a border down the Irish sea,” Mr Gibson says. “The answer is my identity does not depend on a prime minister or even a government. Churchill and Thatcher sold us out. We have been betrayed continuously by British governments. Our loyalty is to the United Kingdom and the Crown.”

“The jury is out on Boris [Johnson]. He could be another great betrayer of Northern Ireland or he could be a supporter.”

Mr Gibson says that he has no intention of engaging with any discussions on a united Ireland.

“If the future is a pre-determined outcome of a united Ireland, then that is not engagement. That is working out the terms of surrender.”

He adds that unionism has to broaden its appeal and reach out to Catholics and ethnic minorities who want to remain part of the UK.

Underlining the pace of change in Northern Ireland, Mr Gibson says that even though he is a Christian and “my moral values would be seen as outdated these days but they are still my moral values but we need members of the LGBT community to support the union as well. We need a range of people to support union. We don’t always need to agree on moral issues, but we can agree on supporting the union.”

Mr Gibson says he gets annoyed by commentary that a united Ireland is inevitable. He cites the most recent opinion poll which showed only 29% in favour of Irish unity. He says it will never happen in his lifetime because the south is not in an economic position to assume responsibility of the north. He asks who will bail out the republic if it gets in trouble similar to the 2008 financial crisis. “Trump is not going to be too friendly if there is a Venezuelan socialist party in power. Europe is not going to bail them out because Europe is going to break up.

The threat of dissident paramilitary violence is ever present in the province. Last month it emerged that the Real IRA had tried to explode a bomb on a ferry going from Belfast to Stranraer to coincide with Brexit day on January 30th.

Mr King warns that if a border poll is rushed and the result is a crude majority in favour of unification, but the complex constitutional, economic, cultural and security issues remain unresolved, then it threatens to plunge the province back into armed conflict. This is a view that is shared widely in politicians on both sides of the border.

Northern Ireland’s troubled past is very evident on the streets of Belfast. People are willing to give their views on a united Ireland, but not their names and background. The issue is too sensitive.

“I was against Brexit. I want to be part of Europe. Freedom to travel is a big thing for me. That is one thing that would make me favour a united Ireland. I don’t think it would happen for a long time though,” a female in her late twenties says.

“I lived in Dublin when I went to Trinity [College]. We [Northern Irish people] were treated differently. I have more in common with Protestants from the same background. There might be benefits to a united Ireland but I can never see it happening unless the south can guarantee the NHS,” a female in her early forties says.

A middle aged man who worked as a lawyer says a united Ireland won’t happen in his lifetime. “I think what Sinn Fein is doing is very dangerous. Too many people don’t want a united Ireland. All this talk of a border poll is going to be very destabilising. Stormont is just back up and running. We have a lot of problems we need to sort out.”

As Northern Ireland prepares to celebrate its centenary in May 2021, the future is more uncertain than anytime in the past. A next census which will be released next year is expected to show a majority of Catholics in the province for the first time.

However, privately many unionists say that the future position of Northern Ireland will be settled by how Brexit unfolds and whether Scotland eventually secedes from the UK. Of these, the position of Scotland is seen as a gamechanger.