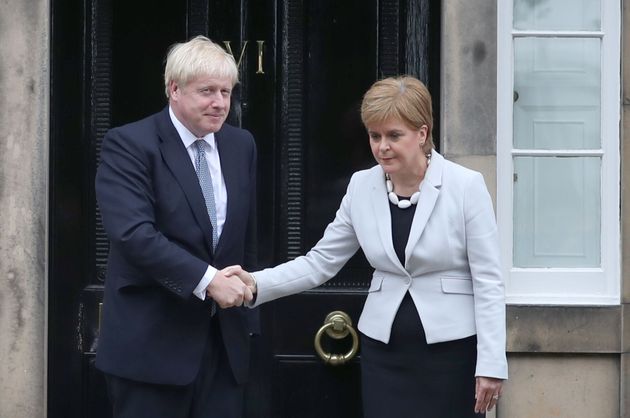 The hard truth though is that we must now ready ourselves for another great struggle – one we cannot avoid or postpone. The disillusionment with our politics which gave ‘take back control’ such power goes back long before Brexit, and will continue to corrode our society after it.

There is a deadly serious threat that it will dissolve the United Kingdom itself. It is the future of our own community and our own Union that now hangs in the balance.

This crisis has at least three parts. First is the legacy of Brexit itself. The UK has been split as never before in living memory. Those divisions will not instantly vanish as we ‘get Brexit done’ – if only because many contentious details remain unresolved. The need for healing is real.

But the Brexit vote also reflected a wider disillusionment, one simmering since long before 2016. Between 1986 and 2013, the percentage trusting the Government to place national above party interest dropped over half to 18 per cent.

As of 2019, a record 72 per cent believe British democracy needs “quite a lot” or “a great deal” of improvement. Nearly two-thirds think the system is “rigged to advantage the rich and powerful”. Most alarmingly, 54 per cent believe we need “a strong leader willing to break the rules”.

This is not some theoretical concern. It is a weakening of the glue that holds our society together and leaves us vulnerable to the viruses of division, populism and manipulation. In the end, it corrodes the bonds which make us a country. Ultimately politics is how we mediate and express the ties between us: if we lose trust in it, we cease to be a society.

The illness in our body politic has many symptoms. But surely the most urgent is that our country is in danger of falling apart. A clear majority of Scottish voters backed the Union in 2014, but that majority is now paper thin. And Brexit hugely increases the pressure.

This is the third element of our crisis. It is the gravest threat to the integrity of the United Kingdom in modern history. Unless we act, our country as we know it could very easily perish within a few years. Some people regard that prospect with complacency. We have to wake up to the profound loss it would mean: economic and social disruption, a border across the heart of Britain.

But, for me, less tangible arguments matter just as much. The loss of the Union would above all be a loss of community, of centuries of solidarity and shared endeavour. Our beautiful, diverse, British identity would be narrowed and reduced. We would be profoundly diminished. We will never keep this country together by fear or force: nor should we want to. There must be a positive argument, a vision of the nation which can command the support of its people.

A positive case already exists for the Union as a co-operative community, far greater than the sum of its parts. But there is also a vision of a Union strengthened and reformed in response to the wishes of its citizens: more devolution of power down and out, and the embedding of basic rights, responsibilities and political structures in a written constitution. There are challenges – the balance of powers within England, for example. But there is no shortage of ways to reconcile the desire for change with preserving the ties of solidarity between us.

And this reform offers a response to discontent everywhere, not just the devolved nations. That is the great point: this is not only, or even primarily, about Scotland. It is about answering that UK-wide call to take back control. Not just from Brussels, but from Westminster; not just to the nations but within them. I know first-hand the potential reform that would unleash in Yorkshire.

Of course, the shape of reform should not be up to politicians alone. We need a deliberative process led by citizens, one that goes beyond the adversarial politics of Parliament or even of a referendum to allow consideration and compromise: a genuine national conversation.

It also requires politicians to act in the national interest. It will require openness to real change, not just chucking money at the problem. If we fail to act, if our Union ends because we did not attempt obvious reforms or a national dialogue, it would be not just a tragedy, but a contemptible failure of our politics. We will have lost our country not from necessity, but for want of imagination and duty among our leaders.

We face a monumental test. The ultimate responsibility lies with the Government, but all of us must hear the alarm that is blaring ever more loudly – and then come together in a spirit of community to address, as best we can, the roots of division and disillusionment. History will judge us all.

Dan Jarvis MBE is the MP for Barnsley Central and Mayor of the Sheffield City Region.