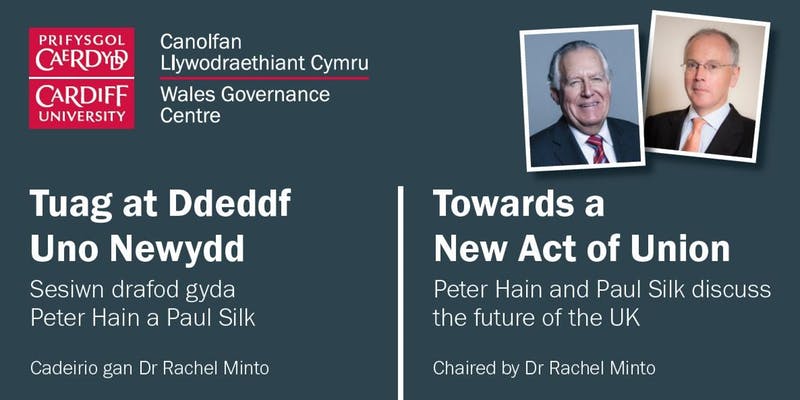 On 26 November 2018 Lord Hain and Sir Paul Silk, on behalf of the Constitution Reform Group, hosted a discussion at the Wales Governance Centre in Cardiff University about the Act of Union Bill 2018. The well-attended event, “Towards a New Act of Union”, attracted many opinion-formers in Wales and was chaired by Dr Rachel Minto, a Research Associate at the School of Law and Politics at the University.

The purpose of the event was to discuss the aims of the Bill, including the desire to rebalance and stabilise the constitutional relationships between the four nations and parts of the UK within the context of Brexit. The panel provided a thought-provoking and timely discussion on the significant and diverse influences that are putting pressure on the UK’s uncodified constitution, and why the Bill is both relevant and necessary for the future governance of the UK in light of greater demands to make powers and decisions at local and subnational level.

Lord Hain opened the discussion by exploring how the Act of Union Bill proposes a bottom-up approach instead of top-down approach to devolution. He suggested that as part of this approach the nations and regions would federate upwards so that they are the “sovereign face of the constitutional union”. It is they that would then decide what happens at the centre. The most notable message conveyed was that it was vital that the Bill’s agenda was viewed against the crisis that the UK is facing with Brexit – but also that Brexit is one part of a much wider picture of political, social and economic events that we are facing in the 21st century. The issue of separatism developing in Scotland and Northern Ireland was also raised. In response to this the Bill attempts to “turn the devolution structure on its head” so that the divisions in our society, between the nations and parts, between towns and cosmopolitan cities and the economic prospects between the young and old, can unify.

“The great majority of citizens feel that the democratic system does not represent their interests – this Bill is one of the key, if not the key, ready made vehicles to address that serious agenda” – Lord Hain

In the second half of the event, Sir Paul Silk gave a clause-by-clause commentary on the Bill and explained how it intends to provide and explain the purpose of the Union – an explanation which has not previously been expressed in statute. He emphasised how the Bill provides a formal structure for the UK based on principles and processes that will command the support of the people throughout the UK, and in each of its nations and parts. Referring to the process of introducing the Bill in the House of Lords by way of a private member’s bill, he acknowledged that most private members’ bills do not become law, but that they can be an effective way of starting a process and stimulating debate on an important topic.

Questions, such as how the Group proposes to allocate policy competences under the single jurisdiction of England & Wales, or how the Group can create a UK convention that supports the proposals outlined in the Bill, were also raised and discussed at length. It was resoundingly acknowledged and agreed by the panel and attendees that the ambition to have a better constitution in light of the UK’s current constitutional flux was one that was worth actively pursuing, and that the Act of Union Bill provides a practical and solid starting-point to begin achieving this.

A full recording of the event can be viewed here.

The Constitution Reform Group welcomes and encourages feedback on the Act of Union Bill.